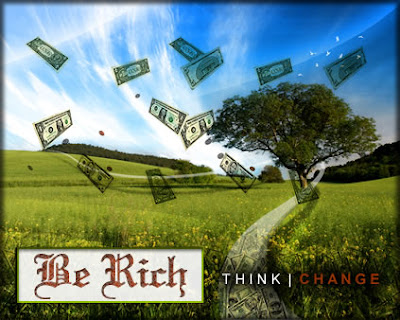 My girlfriend and I had a pretty interesting conversation tonight about “being rich”. The topic of discussion was… “What’s your greatest fear about having money?” I figured I’d blog about what we came up with.

Before I answered the question, I sort of gave an analogy (which I always do) to explain how I view money…

Money is like guests walking into a house party. Think about this… Have you ever been to a house party where everyone is dancing and enjoying their time, and some more party people come through the door and everybody’s like “Hey!”? Does the party stop because someone came in? No!!! The party continues on. Once they are in the house, the party keeps going without missing a beat. In the same way, life is like a party that we should each be enjoying. When money walks through the door, say hey, and keep the party going.

My response to the question was that my greatest fear would be to let money define me.

If I stop and allow money to interrupt my party, then something is clearly wrong. Money may enhance the party or help to fund other parties, but it should never stop the party.

I know that sounds crazy, but it is all too common to find people who shape their lives around money. We let it interrupt our marriages, our families, our friendships, and most importantly… our lives. We have this stupid expectation that once we have the money, then the party starts. That’s what I call a “Party-Pooper with Stinking Thinking”. It is this same way of thinking that Christ spoke against. He ultimately knew that our lives were worth far more than a paycheck and that we exist for far more than the chase and pursuit of money.

My girlfriend and I both agreed to this:

Since we are both familiar with Craig Groeschel and Andy Stanley’s message series on “Be Rich”, we’ve both agreed that instead of trying to “get” rich like most people, we would rather “be” rich in a way that honors God (from the words of Craig Groeschel). Though we may be college students and no-where-near having 6-figure incomes or even starting our careers, we are preparing ourselves mentally, spiritually, and financially for the type of people we want to be and the lifestyle we want to model. Instead of letting our net worth define us, we have decided to allow Christ to define us as we leverage our finances in a way that honors Him.

What’s your take on the topic?

Is innovation relevant in the Church? From my research of church in the 21st century, I am finding that being innovative and creative in your ministry is not only relevant, but necessary. When you examine the 1st church of Acts, they were innovative in how…

If you don’t know what the heck this post is about, you are far-far-far behind. Andy Stanley, Pastor of North Point Community Church, just finished one of the best message series on faith that I have ever heard. Over the course of 6 weeks, he…

A Letter From God

Dear Child, Why do you run and hide away? I know there’s beauty in your face, what is this creature that I made, so afraid of Love? What must I say, how can I prove, convince this world, especially you, just how happy you would…