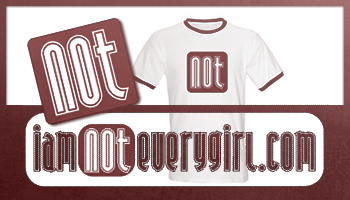 For those of you who don’t know, this site was spearheaded by a good friend of mine – Milan Ford – after watching a disturbing performance of “Every Girl” on the 2009 BET Awards by famous rapper, Lil’ Wayne. Milan, being totally disgusted with BET allowing such a degrading performance to take place and even more for the song to even be promoted on radio, took it upon himself to speak out against it.

Feeling that no one was willing to take a stand against a song that directly degrades women with lyrics such as “I wish I could [blank] every girl in the world”, the site – iamnoteverygirl.com – was born. The site was designed to rally support from young women, artists, and organizations to say NO to the promotion and playing of this song that is negatively influencing both our youth and culture. Another close friend of mine, Janay Bazemore, took it upon herself to rally behind this serious cause during the month of July by posting a video about it on Youtube.

Check it out here.

I’ve decided to rally behind this cause as well and spread the word. With only a week left to get the word out, I encourage you to check out the site and get involved.